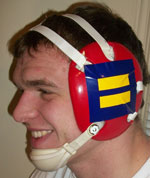 Saturday update: Hudson Taylor wound up fourth in the 197-pound class. He won his first match Saturday, 10-0, then lost in the third-place final, 4-2.

Friday update: Hudson Taylor lost, 1-0, to Craig Brester of Nebraska in the semifinals. Taylor will wrestle for third place Saturday.

Original item: University of Maryland wrestler Hudson Taylor won both of his first-day matches to reach the quarterfinals of the NCAA wrestling championships in Omaha. Taylor, ranked third in the nation, is now three wins away from winning the national title at 197 pounds. ESPN will be showing the finals on Saturday at 7:30 p.m. EDT.

Taylor is known to Outsports readers for his passionate support of gay rights, going so far as to wear a Human Rights Campaign sticker on his headgear during matches. But winning the title will not be easy for Taylor.

Like any quarterfinal match, Taylor will not have an easy time tomorrow but should be able to outlast No. 6 seed Eric Lapotsky of Oklahoma. If he does, that would set up a potential match with No. 2 seed Craig Brester of Nebraska, potentially the most competitive match of the entire tournament.

Almost all the pundits agree No. 1 seed Jake Varner (Iowa State) is an unstoppable force and that Taylor won’t be able to crack him should he make it to the finals, but beating Brester will be a solid consolation prize.

Taylor is 40-2 this season, but one of those losses is to Varner. I know a lot of our readers will be rooting Taylor on.