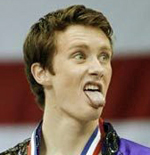 The most notable absences from the world championships are in the men's events. The U.S. team has replaced both gold medalist Evan Lysacek, and Johnny Weir, who announced they would not be in attendance because of other opportunities. For Evan, he is currently involved with the reality series "Dancing With the Stars,” and Johnny he has been on a talk show and media frenzy. But both have said they are not retiring from competition and will return next season.

In the pairs event, Shen Xue and Zhao Hongbo announced their retirement right after their gold medal win.

However, this competition is not without merit. There are still some competitors who were front and center at the Olympics; for some it will be a chance to prove, and for others it's merely to add yet another title to their resumes.

Missing is reigning world silver medalist Joannie Rochette of Canada. After winning a bronze medal under tough emotional circumstances at the Olympics, Rochette issued a statement saying that she needs time to grieve for her mother. I think the shock of her mother's death just days prior to the ladies competition has worn off, and reality has set in.

Both Kim Yuna of South Korea and Mao Asada of Japan will both compete. Asada says she plans to not only win at this competition, she plans to beat Kim's world record point score she got at the Olympics. I don't think it will happen. But there is your fight for gold and silver right there.

Japan's Miki Ando who dominated this year’s Grand Prix series, but showed up to the Olympics looking tired and sluggish, was disappointed with her fifth place finish in Vancouver. Ando, a fierce competitor, probably went back to New Jersey to train with one goal in mind -- not to make the same mistakes twice.

The Americans also have something to prove. U.S. champion Rachael Flatt was fifth at last year's worlds, and was eyeing the podium at the Olympics. But her lack of artistry and some technical calls at the Olympics left her in seventh place. Flatt said she planned to make sure she would lose her technical calls and move up. U.S. silver medalist Murai Nagasu surprised everyone at the Olympics and wound up in fourth place. She wants to prove that it wasn't a fluke. She must make sure all of her jumps are clean and not called for deductions.

With Evan Lysacek not attending, Evgeny Plushenko is the clear-cut favorite. Especially with Stephane Lambiel announcing his retirement. There is no skater that I think can beat Plushenko unless he falls flat on his face twice. However, the judges could be a tad harsh on the arrogant Russian, seeing as he managed to insult the sport with his behavior after not winning Olympic gold.

Daisuke Takahashi kind of came out of nowhere to win the Olympic bronze Medal. After he missed last season due to injury, I had basically written him off. However, his long program, when skated well, earns a high review from the judges. If he skates like he did at the Olympics, minus the miserable fall on the quad, he could use his artistry to take the title away from Plushenko. However, I don't think Takahashi has ever had to great back-to-back competitions.

Reigning world silver medalist Patrick Chan has something to prove. After having a bad luck year -- a suspected case of H1N1, a torn calf muscle, being investigated for doping after the doctor treating his torn calf muscle was caught importing illegal substances -- his coach then ceased their partnership one month before the Olympics.

Chan was under a huge amount of pressure from this country to bring home gold, but instead he ended up in a very controversial fifth place finish after having two major mistakes in his long program. Chan without a doubt is probably the best overall skater in the entire world. His transitions, and choreography come out like he was born with them. If he plans to make that podium, he must be at his best technically.

France's Brian Joubert has been at the top of this sport, and as of recently been looking way up from way down. At his third Olympics, Joubert finished a disastrous 16th place. As the reigning world bronze medalist, Joubert has something to prove, and could very well do it at this event.

Nobanori Oda looked awesome at the beginning of this season. Winning two Grande Prix assignments, and placing second at the Grande Prix Final, I thought he was a shoe in for the medal podium at the Olympics, but it was not meant to be. After pulling a Tonya Harding in the long program, Oda dropped in the standings. Hopefully he remembered to chances his skate laces for this event. With two clean skates, Oda will be a challenge for this podium.

American Champion Jeremy Abbott left the ice in tears after his short program at the Olympics. Abbott has no weakness's … except the competition rink. His nerves get the better of him more often then not. When Abbott is on, he is the only one that i can think challenge Plushenko technically and artistically. His ninth place finish at the Olympics was a huge disappointment. Let’s hope he learned something from this, and it fuels success at this years worlds. I would love to see him on the podium.

He may not make the podium, but American Adam Rippon is already fast proving to be someone to watch for in 2014. The two-time defending junior world champion, Rippon did not skate well at the U.S. Nationals. However, they sent him to Four Continents and after a disastrous short program, he skated a brilliant long and won the event. However, there were no elite stars at the event. Look for his signature "Rippon Lutz” -- he does a triple lutz with both hands clasped together above his head. It’s a total huge point-getter when landed. Rippon's mission at these worlds is to set himself up for the future.

American veteran Ryan Bradley is returning to the championships after a three-year absence. Although not a medal threat, Bradley is a true entertainer on the ice. His weapon -- two quads planned for the long program. His weakness is his artistry and a lack of difficult footwork. At age 26, this is probably his last hurrah at these championships.