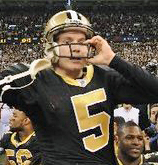 The Saints reached the Super Bowl without the Vikings ever touching the ball.

The NFL took a sensible step today when owners voted 28-4 to change the overtime rules for playoff games. Gone forever from the playoffs will be the most anticlimactic play in the the NFL -- a first possession field goal by the receiving team.

From now on, a team receiving the kickoff in OT will need to score a touchdown to win the game. Otherwise, the other team will get a possession to tie or win the game. After each team gets a possession, it will be next team to score wins if the game is still tied.

The change came because it was becoming easier for teams to win the coin toss, make two first downs and kick a field goal to win. This was most evident in the NFC title game, where the Saints returned the ball to their 39, got two first downs via debatable penalties, another on a questionable catch and won on a field goal without the Vikings ever getting the ball. It was a lame and unsatisfying ending (save for Saints fans) to what had been a thriller of a game.

The rule is not perfect and does not apply to the regular season. Since the league adopted OT in 1974, only 8% of games were won by teams receiving the ball and scoring a touchdown, so this should ensure that much more often than not, each team will get a possession. It's a good rule that helps cut down on the importance of winning the coin toss.