Being gay and playing basketball

Share All sharing options for: Being gay and playing basketball 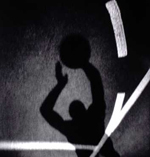 I always find it interesting when non-gay sites write about the subject of gays in sports. It's often a splash of cold water to the face when I allow myself to think that most everyone might be starting to be accepting. I'm especially intrigued by the comments, since their anonymity allows people to express their most vile prejudices.

Dime, the basketball magazine, has an online piece by Austin Burton that touches on gays in the sports. He uses the terrific blog by an anonymous pro player overseas, Playing Basketball from the Closet, as a peg to discussing the issue.

Burton does a really good job, plowing a lot of familiar ground for Outsports readers in outlining the reason no active NBA player has ever come out. I was most heartened, though, that the majority of the 100+ comments had no problem with gays in the sport. I'll leave out the haters (whose arguments we've heard a million times). Some examples of the more enlightened comments:

I would have no problem with a gay teammate. In fact I have had gay team mates in the past, and they have been just as competitive and driven as everyone else on the team.

it’s ok to admit to yourself that you’re prejudiced, but you should always strive to fight that prejudice and try to evolve. Simply being honest and admitting you’re a homophobe doesn’t let you off the hook. Let me put it this way: if, say, Bill Laimbeer came out and said something like “I’ll be honest, I just don’t like black people” would you excuse him with “well, at least he’s being honest about it”? – probably not. It’s like those people that say that they don’t care about a person being gay, but just don’t let them kiss in front of me… Sure, it can be awkward, but it shouldn’t be. And we should all be ashamed if it is.

Are there gay NBA players? I’m sure there are. Will these players be ‘coming out?’ I don’t think so. Too much to lose. Would they be alienated? More than likely. Would I play with gay man? I see no reason why I wouldn’t.

Bottome line is, if a guy can play ball he can play ball. As long as his off court dosen’t affect his on court, there should be no problem. As a pro, all athletes should know that the locker room is still a place of work and it’s not necessarily a part of your private life. They should know the boundaries there so all should be good.

if we expect NBA ballers to do something right, and the league itself to be a caring organization, having gay players to come out (if they are willing to) is a huge step into the right direction.

unfortunately gay ball players will never come out simply based on the fact that people as a whole are basically a mob and a mob is just that, a mob.. and a good 80% of all athletes are raised in testosterone filled enviroments their whole lives, with their pops callin gay dudes “fairies” and so on..

I think it’s OK to have fear of something that’s not familiar or something you’re not comfortable with. But I can tell you any slight weirdness I felt about changing in a locker room setting with a bunch of lesbians (for this story to work, please note that I am FEMALE) went away when I realized none of them were looking at me or even cared. You know why? Because– shock– gay people have better things to do with their time than try to “convert” straight people. I think people would find that it really just wasn’t that big of a deal.

I was really apprehensive about reading the comments on this post, with all the trash talking and posturing (no offense, it’s hilarious) that gets thrown around on a regular basis.

But I must say, I have a whole new perspective on most of the Dime readers after this post. I’m utterly impressed.

With a few notable exceptions. (Yes homophobes I’m looking at you.)

And it matters because?

“Otherness”, of all kinds, is a bitch, isn’t it? This reminds me of the era when the first all-black team needed to be discussed ad infinitum.