Share All sharing options for: NHL players say they have gay teammates 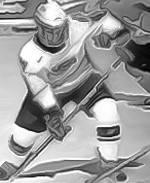 Outsports reader Kevin tipped us off to this interesting nugget in a poll of 50 NHL players for ESPN the Magazine. Via the Puck Daddy website:

"Do you think you have any gay teammates?"

This is not a scientific sample and the players polled are not identified, but I still find it a high number. Almost half of those polled think they have a gay teammate. I would have guessed the figure to be lower, considering how easy it is for closeted jocks to hide. It's possible that the players pegged as gay are anything but -- athletes who have interests different from the jock mainstream are often assumed gay.

I have been asked numerous times what sport will produce the first openly gay North American pro athlete, and I say the NHL. The culture is quite macho, but that's modified somewhat by the fairly tolerant cultures of Canada and Northern Europe, and what seems to be a lack of religious fervor we see in sports like football, basketball and baseball (I can hardly remember a hockey player thanking God for scoring a goal). In addition, the media spotlight shines less on the NHL, so an out player would not get the wall-to-wall coverage an NFL player would.

In the early 1990s, I was interviewed on CBC radio in Toronto for a show on gay athletes. The show featured two current NHL players, whose voices were altered to hide their identity. Even that was eye-opening to me -- pro gay jocks who allowed themselves to be interviewed, even anonymously. Also, sports researcher Eric Anderson got a closeted NHL player to tell his story for a 2005 book on gay athletes.

This is the second ESPN poll in nine months that asked questions about gays in sports. Last summer, a poll of 85 random college football players found 49% saying they had a gay teammate.

The image used above is of a gay hockey player, though he plays in high school. It is the logo of Mikey, a Minnesota teenager who has NHL aspirations and writes an awesome blog.