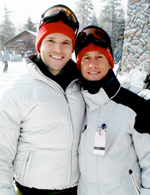 Ski Bums started as a New York City-based gay ski and snowboard group and has grown into the largest gay-ski group in the United States. Started by Chris French, the group now boasts members from all over the world. Chicago Free Press recently ran an article about Chris and his group.

Because a taste wasn't enough, French founded Ski Bums in 2003. The country's largest GLBT skiing and snowboarding club, it now has more than 650 members from 30 states, the United Kingdom, Canada and Asia. The club, which welcomes GLBT skiers and snowboarders of all skill levels, typically organizes nine trips every year to places as varied as California, Colorado, Canada and Chile.

I can't say enough good things about Chris and Ski Bums. He's a great, welcoming, fun-loving guy. I've never been on one of his trips, but I have heard nothing but great things. I have been to the social events Ski Bums hosts in New York, and they're always great: People there just seem like they're always in a great mood, and they leave any pretension at home.

So if you like to ski or snowboard, you've gotta join Ski Bums and join them on one of their adventures. I'll be doing so at some point in the near future, too.