Share All sharing options for: Sporty GLAAD awards this weekend 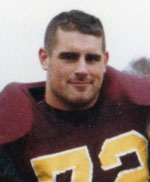 This weekend are the GLAAD Awards in New York City where the sportiest of their 2010 Awards, Outstanding Digital Journalism-Article, will be handed out. It's one of a select few awards being handed out on stage this year, which is a nice nod to the sports world. I'll be attending, and Brian Sims (who inspired Outsports' nominated article) and Philly gay-sports maven (is that what I should call you, Larry?) Larry Felzer will be there too. On top of that, Brendan's brother, Patrick Burke, will be at the awards; I've been emailing with him, and he's a great guy (he's with the Philadelphia Flyers). From his messages, my guess is he will become a strong advocate for gays in sports.

Any other Outsporters going to the awards in New York City March 13?