Share All sharing options for: 'Training Rules' to screen during Final Four 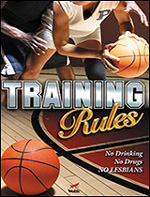 Producers of the groundbreaking film "Training Rules" claim the NCAA has declined to show the film at a coaches conference in San Antonio during this weekend's women's Final Four. Publicist Jordana Frishman told Outsports:

The Coaches Association at the NCAA Final Four, held in San Antonio this April, has refused to show the acclaimed basketball documentary film, "Training Rules," at its Coaches Conference, an integral part of the Final Four. ... Basically, they said that "Training Rules" is too controversial. It was ok to have parts of the panel on homophobia, but not to use the film.

The film's distributor, Wolfe Video, has decided to screen the film twice in San Antonio during the Final Four at the Esperanza Peace and Justice Center on April 5th. Filmmakers Dee Mosbacher and Fawn Yacker, as well as Sherri Murrell, the only “out” lesbian coach in Division One women’s basketball, will be in attendance. Dee Mosbacher is available for comment.