Share All sharing options for: S.I. -- Phillies over Rays in World Series 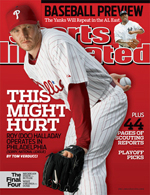 The Philadelphia Phillies' two-year reign as National League champs ended this week when Sports Illustrated came out with its baseball preview issue. The magazine picked the Phillies to beat the Tampa Bay Rays in the World Series, a replay of the 2008 season.

Given S.I.'s track record of making picks and the infamous S.I. cover jinx, the Phillies are doomed. And cover boy Roy Halladay, the stud pitching free agent pickup, will likely be on the DL by Memorial Day.

S.I. picks the Yankees to win the American League East, but to lose in the playoffs to the wild card Rays. They also see the Twins and Angels winning their A.L. divisions. In the National League, the Phillies are seen winning the East, with the Braves as a wild card, the Cardinals taking the Central and the Rockies the West.

With the season starting Sunday, who are you picking?