Share All sharing options for: Santonio Holmes takes naked self to New York 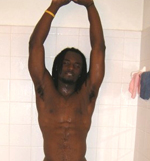 Not surprisingly, one of the all-time most popular posts on our blog is the one that links to Pittsburgh Steelers wide receiver Santonio Holmes naked in the shower. Every time Holmes does something newsworthy -- like catch the winning TD in last year's Super Bowl or be accused of throwing a drink in a woman's face at a bar -- the story of his impressive appendage gets a lot of hits from people doing Web searches ((The top three blog searches on our blog the past hour are: santonio holmes shower; santonio holmes nude; santonio holmes penis).

It's happening again after the surprising news that Holmes, the Super Bowl MVP in the 2008 season, was traded to the New York Jets for a fifth-round pick. Holmes is facing a possible four-game suspension for violating the league's substance abuse policy.

The Jets in the offseasons have acquired a past league MVP in LaDainian Tomlinson and now a Super Bowl MVP. Holmes is top receiver, so the Jets offense will be better, but he has a reputation as a guy who gets into a lot of trouble, which could be his undoing in the league.

The Steelers have always prided themselves on being a model franchise, so Holmes was sullying that image and the team had had enough. More difficult will be how the team handles star quarterback Ben Roethlisberger. Big Ben already dodged one sexual assault charge last season, and Monday we will hear whether he will be charged in an incident involving a 20-year-old girl in Georgia. Even if Roethlisberger avoid an indictment, the team may decide to take some sort of action. (Update: Roethlisberger was not indicted.)