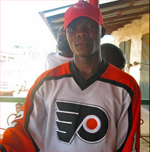 Liberia is a West African country that has a tropical climate, no electricity grid and where half of the people live on less than $1 a day. It also a place where the concept of ice hockey is totally foreign. Which is why it's strange that among the most coveted items are NHL jerseys.

Bonnie Allen of Canada's National Post has a fascinating article detailing how widespread the wearing of NHL jerseys is in Liberia, which has been racked by violent civil war the past 14 years. Quality seems to be the biggest reason.

Bizarrely, the authentic hockey jersey has become a status symbol among the poor for its "premium-grade" rating and high price tag ($4).

"It is tough, tough material," street vendor Evelyn Togbah raves. "If you buy it, you can wear it for 20 years."

The bright NHL sweaters outshine the dirty, ripped and torn T-shirts hanging off many struggling Liberians who are forced to repeatedly wear one or two shirts.

The story details the controversial trade in used clothing from the more prosperous West and how in some places they are called "Dead White Man Clothes," since no sane person would ever give away such good clothes.

Allen's goal is get photos of people wearing all 30 jerseys and she is halfway there.