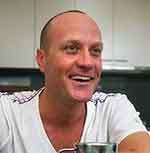 Australian swimmer Daniel Kowalski, who won four Olympic swimming medals before retiring, came out as gay in an opinion article he wrote for Australia's Sunday Age. "Living the lie and deflecting the innuendo grows tiring. It is emotionally exhausting and it flat out hurts no matter how hard you try to block it out," he wrote.

Kowalski, 34, won medals at the 1996 and 2000 Olympics. He waited until 2006, three years after retiring, before he started his coming out process to family and close friends.

I finally accepted my sexuality at the end of 2006 following a huge anxiety attack at work. After what were literally years of torment, denial and very, very dark times, I couldn't live a lie to myself any more.

You often read that when people came out they had felt depressed or had suicidal tendencies. I, like them, experienced all of the extremes, but mostly it was the loneliness that was the hardest part of being gay - and still is.

The number of times I have sat on the couch or lain in bed bawling my eyes out, scared and fearful of the future, are too many to mention. I know that people, regardless of their sexuality, experience this feeling, but stupidly in my mind I honestly felt that there was nowhere to go.

I am not sure if being an elite athlete and the values you are supposed to live by compounded this, but it definitely didn't help the situation.

Kowalski told the Age in an interview that he was inspired to come out publicly after Welsh rugby star Gareth Thomas revealed that he was gay late last year.

He was so moved by Thomas's story that he contacted the player. The resulting conversations left him feeling ''excited and relieved'' for Thomas, but he also felt ''anger because I was jealous … he was out and felt liberated and free.

''And it really got me thinking that I could do that (come out) if I wanted to. I felt really compelled to do it because it's very tough to live a closeted existence.''

Kowalski's article and the related story by the Age show a man in torment about his sexuality, and the ways he tried to deny it. He said that his fear of keeping his secret led to a lack of self-confidence that might have affected his performance in the pool. It is a common refrain we have heard from those few jocks who came out active -- not having to hide increased their performances since they no longer had the fear of discovery.

The swimmer is under no illusions that other athletes will follow his lead and come out, but his is another public story that will no doubt inspire others in similar circumstances to at least consider it.