Roethlisberger and the "gay" "sausage party"

Share All sharing options for: Roethlisberger and the "gay" "sausage party" 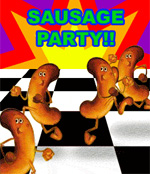 The headline is a mashup of two terms used by Willie Colon, a Pittsburgh Steelers teammate of Ben Roethlisberger, who was with the quarterback in Milledgeville, Ga., the March night he was accused of sexual assault by a 20-year-old in a bathroom of a bar. Roethlisberger was not charged.

The Georgia Bureau of Investigation report, obtained by The Smoking Gun, describes how Colon, an offensive lineman, was being pestered by women at one bar who wanted to get to Roethlisberger through him. This is where the "gay" part comes in.

"Colon got up because he felt this was 'gay' and he did not want to be used by the girls to communicate with Roethlisberger," the report said.

I am not sure how this is "gay," so someone please enlighten me. Unless gay is a general slur used by Colon to describe anything he doesn't like. When Big Ben and his group headed to the next bar (the Velvet Elvis, where he was accused of the sexual assault), Colon got even more upset.

When Roethlisberger's posse later relocated to the VIP room of another club, Colon was not happy with the male/female ratio, terming it a "sausage party" because "there were too many males in the VIP room and not enough females." To rectify the problem, only women were allowed into the exclusive section. As Colon explained, "that was because [Roethlisberger & Co.] often had to deal with jealous boyfriends, and found it simpler to keep them out."

I had never heard "sausage party" before, though I immediately knew what it meant. Sounds like a great title for a Colt video.

Roethlisberger, though not charged with any crime, is still expected to be suspended any day now by the league or team for inappropriate conduct.