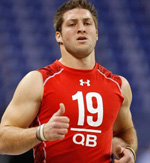 Tebow was the featured speaker at a dinner in Nashville at Lipscomb, a private Christian university where the 5,000 guests paid $50 each to hear from the expected NFL draftee, the Palm Beach Post reported.

Tebow’s speech revolved around the way Tebow said he lives his life: Be willing to stand alone and to stand for something; to live life with passion; and to finish strong, which was the Gators’ motto for the 2009 season.

As to his first tenet, standing for what he believes in, Tebow told the crowd that multiple companies told him before the Super Bowl that they could not let him represent their products if he went ahead with his pro-life commercial at the Super Bowl. But Tebow said losing sponsors was a small price to pay for the ability to spread his message about family and faith.

Thank you, Saint Tim, for letting the world know again how principled you are and how you are willing to sacrifice money for your faith. Of course, that didn't stop Tebow from charging $160 for an autograph (plus an additional $75 for a photo) at a March event, which netted at least $240,000 for him and his foundation.