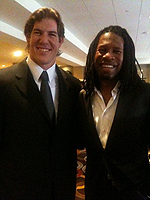 Two big-time spots figures were featured at the Los Angeles GLAAD Awards this past weekend, and I had the privilege of personally thanking them both for all their gay-positive public statements. NFL linebacker Scott Fujita (left in pic at the Awards with LZ Granderson) and his lovely wife were front-and-center at ESPN's table. Fujita said he and his wife are both passionate about the issue of gay marriage, which became evident when he spoke on the subject months ago. When I asked to see his Super Bowl ring, he said they wouldn't be getting them until June; Hopefully he'll return to the GLAAD Awards next year to show it off.

Johnny Weir was a speaker at the Awards, talking about gay youth with Chaz Bono. But Johnny's bigger statement came at an Equality California fundraiser on Sunday.

Video of Johnny's EQCA appearance after the jump.

It's so great to see elite athletes, with contracts and endorsement deals on the line, advocating for our marriage rights. We'll keep cheering for both of them for years to come.