A soccer kiss has England talking

Share All sharing options for: A soccer kiss has England talking 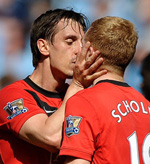 When I saw photos of Manchester United's Gary Neville kiss teammate Paul Scholes on the pitch after Scholes scored a late goal to give ManU a key win Saturday, I thought no big deal. Soccer kisses are pretty routine, especially in Europe. But the Neville smooch has drawn headlines in Britain and at least one insinuation of homophobia directed at an online soccer site.

Among the headlines: "When men's lips meet. By kissing Paul Scholes, Gary Neville declared war on homophobia." "Kiss and hell." "Eternal Scholes gives United kiss of life." "Kiss of life." A columnist for the Guardian declared it a blow against homophobia:

Neville ... may be married with two kids, but if this crazy, untamed, obsessional partisan feels that the only way of truly conveying his feelings is to lock lips with a bemused redhead then surely there's a broader message that could be made from it? The Manchester Pride event runs through the last 10 days of August this year. Neville should be invited as a guest of honor. ...

This was no peck on the cheek, this was a full-blown face-sucking. It was a greeting both intimate and red-blooded. 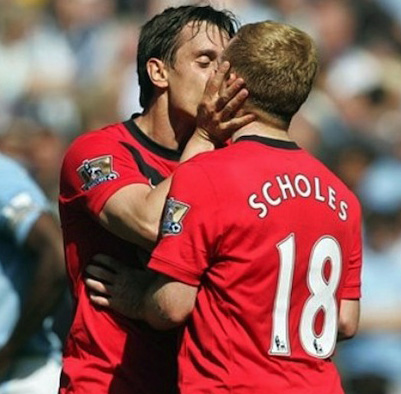 Someone at ESPN's Soccernet was caught naming the photo "nevillegay," as the Huffington Post explains:

Kisses between teammates after an important victory are not unheard of, but apparently one ESPN Soccernet editor read more deeply into the moment. He posted a picture of the pair smooching on Soccernet and named the file "nevillegay." As Dirty Tackle points out, the name was later changed to "nevillekiss" and was ultimately taken off the site when more recent news replaced Man U's victory.

The weirdest reaction, though, came from Barry Glendenning, sports blogger for the Guardian:

That kiss was wrong. Wrong. Wrong. Wrong. Wrong. Wrong. And before you scuttle off down to the comments section to level accusations of homophobia at us, don't bother. If it was two ripped and dashing footballers – some Matt Taylor-on-Jason Roberts action, for example – we'd have no problem with such ostentatious public displays of man-love and possibly be even a little turned on. Hell, even if Gary Neville had just planted one hand on either side of Paul Scholes's head and laid a shock-and-awe black-and-white movie style smacker on his lips, that would have been fine too. But it was the tenderness of the moment, the cupping of the face, the tilting of the heads, the eyes closed expectantly, the blur of ginger hair and wispy not-quite-beardness in yesterday's sport sections that put us off our lunch. Down with this sort of thing. Careful now.

I need a translation on that, since I have no idea what point he is trying to make. But the "it's icky, I can't stomach food after seeing it" tone of the piece shows that Glendenning clearly has some issues to work through.

Homophobia has been a problem in English soccer, to the point where they can't get players to speak out against it publicly lest they be ridiculed and labeled. The intense coverage of the kiss on the pitch shows there is still a long way to go.