Share All sharing options for: Ric Flair doesn't want a gay around wrestling? 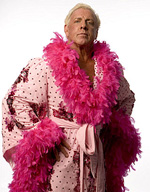 It seems not everybody at TNA is happy to have a bisexual character who flirts with hot young blondes. Another (formerly hot young) blonde, Ric Flair, allegedly confronted the lust object of bisexual TNA wrestler Orlando Jones and showed his displeasure in having a fag around the wrestling ring (BTW, the picture to the right is Flair, not Jones' gay friend). From Jason Powell's ProWrestling.net:

I originally heard that Flair asked the man to leave [a bar], but was told yesterday that Jordan's friend left the bar because he was shaken up by what Flair told him. I'll let you form your own conclusions as to why FlOair was so uncomfortable with the man. Perhaps there's more to the story that I'm not aware of, but Flair was said to be fuming over the male companion having a role in the company and not belonging in the locker room.

I've heard through the grapevine that Flair is far from gay-friendly, so this isn't a big surprise. Maybe the old man formerly known as the pink-boa-wearing "Nature Boy" does have some issue with gays. Or maybe he's just pissed that somebody looks cuter than he does.