Being white will hurt Toby Gerhart in draft

Share All sharing options for: Being white will hurt Toby Gerhart in draft 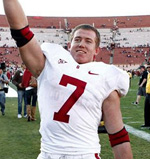 Here's a twist on a story involving race: Being white will hurt Stanford's Toby Gerhart in this week's NFL Draft, because there are virtually no white running backs in the league. As Michael Silver of Yahoo reports:

One longtime NFL scout insisted that Gerhart’s skin color will likely prevent the Pac-10’s offensive player of the year from being drafted in Thursday’s first round.

“He’ll be a great second-round pickup for somebody, but I guarantee you if he was the exact same guy – but he was black – he’d go in the first round for sure,” the scout said. “You could make a case that he’s a Steven Jackson-type – doesn’t have blazing speed but he’s strong and powerful and versatile.”

Gerhart himself has had to deal with the race question directly:

“One team I interviewed with asked me about being a white running back,” Gerhart says. “They asked if it made me feel entitled, or like I felt I was a poster child for white running backs. I said, ‘No, I’m just out there playing ball. I don’t think about that.’ I didn’t really know what to say.”

Gerhart is 6-1, 231 pounds, yet ran a 4.5 40-yard-dash at the combine with a 38-inch vertical leap. He played in a big-time college football conference and was a total stud. Yet, "white running back" equals "slow running back" in the eyes of many talent evaluators, who simply can't believe what a stop watch and their eyes tell them. In the NFL, white backs generally play the fullback position.

It still seems self-defeating, though, for an NFL team in need of a running back to pass on Gerhart simply because he doesn't "look" like a running back should. I hope Gerhart makes those teams pay every time he lines up against them.