Share All sharing options for: Ben Roethlisberger suspended for 6 games 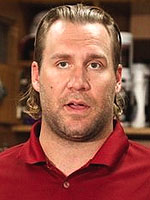 The NFL has rendered its verdict on Pittsburgh Steelers quarterback Ben Roethlisberger, accused but not charged with sexual assault in Georgia: A six-game suspension that can be reduced to four if he meets certain conditions.

“I recognize that the allegations in Georgia were disputed and that they did not result in criminal charges being filed against you,” Commissioner Roger Goodell said in a statement. “My decision today is not based on a finding that you violated Georgia law, or on a conclusion that differs from that of the local prosecutor. That said, you are held to a higher standard as an N.F.L. player, and there is nothing about your conduct in Milledgeville that can remotely be described as admirable, responsible or consistent with either the values of the league or the expectations of our fans.”

It is considered groundbreaking for the league to suspend someone not charged with a crime, but Goodell cited its personal conduct policy to justify the decision. And though the commissioner did not mention it, this is the second allegation of sexual assault against Roethlisberger in two years. Combine that with the sordid details in the Georgia investigation and the ensuing public outcry for action, Goodell really had no choice but to suspend the quarterback.

"The Personal Conduct Policy makes clear that I may impose discipline 'even where the conduct does not result in conviction of a crime' as, for example, where the conduct 'imposes inherent danger to the safety and well being of another person'," Goodell wrote in his letter to Roethlisberger.

"As the District Attorney concluded, the extensive investigatory record shows that you contributed to the irresponsible consumption of alcohol by purchasing (or facilitating the purchase of) alcoholic beverages for underage college students, at least some of whom were likely already intoxicated. There is no question that the excessive consumption of alcohol that evening put the students and yourself at risk. The Personal Conduct Policy also states that discipline is appropriate for conduct that 'undermines or puts at risk the integrity and reputation of the NFL, NFL clubs, or NFL players.' By any measure, your conduct satisfies that standard."

Roethlisberger can participate in training camp and exhibition games, but will have to sit at least four games of the regular season. He is expected to also have to undergo counseling.