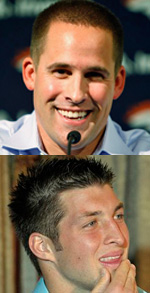 New Denver Broncos quarterback had an instant attraction (in a football sense, I think) when he met coach Josh McDaniels at the scouting combine prior to the draft.

As Tebow told the L.A. Times (via Pro Football Talk):

"I was jacked leaving that room," Tebow said. "I didn't even want to visit another room. It was not enough time. We were excited, we were enthusiastic. There was passion. It was just intense, and it was ball, and it was juice. The juice level in that room was high, and it was awesome."

Jacked? Ball? Juice? Was this a predraft interview or a Fratmen audition?