Lysacek: Weir not good enough for 'Stars on Ice'

Share All sharing options for: Lysacek: Weir not good enough for 'Stars on Ice' 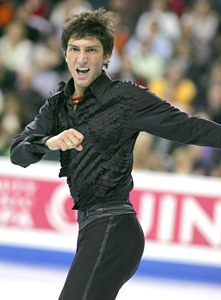 Evan Lysacek has sharpened his claws on Johnny Weir in a new interview over at MetroMix.com. The Olympic gold medalist says that Johnny Weir simply wasn't good enough to be chosen for "Stars on Ice":

“Stars on Ice” is really selective of who they hire and they only hire the best of the best to skate. It would’ve been hard of them to justify hiring him, and I think he was really upset because he wanted the financial benefit of the tour. A lot of us in the skating world were really disappointed in the way he reacted, basically whining that he wasn’t chosen.

He's either blind or a bigger bitch than any of us knew. Weir was third at the U.S. Nationals and sixth at the Olympics this year (and consensus is that he was one of the top four skaters at the Olympics). He's won U.S. Nationals three times and finished second once. He's also won a bronze at Worlds. He's easily as decorated as Evan's tour-mate Michael Weiss, the difference being that Weiss is married to a woman. And Weir is more accomplished than Jeremy Abbott by a mile, the difference being that Abbott doesn't walk around in his underwear on national TV.

No Evan, Johnny wasn't whining. He was reacting to perceived homophobia. But I guess you wouldn't know anything about that, since you're straight as an arrow.

At least Evan left this little gem for us in the interview...

Last question: Are you seeing anyone?
I’m single. The reason, well…(laughs)…I’m limited to who I can see. I’m dating in L.A., but I just haven’t found the right girl.

Hat tip to Jennifer A.