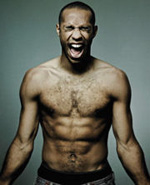 One of the strongest international players in the world, France's Thierry Henry is also one of the hottest soccer players around. The 32-year-old is France's all-time top scorer in international play and was a key component to their run to the 2006 World Cup finals (he was also part of the World Cup championship team in 1998). The former Arsenal striker now plays with Barcelona. He's 6-foot-2, and you'll be seeing him in this summer's World Cup as captain of the France team.

More photos after the jump.