Share All sharing options for: Butler to play Duke for NCAA title 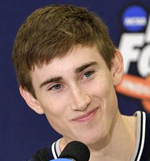 CBS got the matchup it wanted in the NCAA men's college basketball final -- Butler vs. Duke, David vs. Goliath. It all came together when Butler held off Michigan State, 52-50, while Duke ripped West Virginia, 78-57.

The two Final Four games were generally uninteresting. For a two-point game, the Butler-Michigan State contest was rather blase, mainly because neither team could buy a basket in the final 12 minutes. Butler went almost 11 minutes at the end without a field goal, and Michigan State was not much better. It's not very interesting to watch shot after shot clank off the rim (the defense wasn't that good).

If Butler shoots Monday like it did Saturday (30%), Duke will win by 20. The Blue Devils, the consensus pick to be the first No. 1 seed bounced from the tournament, are instead playing to win their first title since 2001. I stopped watching Saturday's game when WVU star Da'Sean Butler crumpled to the floor in agony after hurting his knee; it was compelling to watch Coach Bob Huggins bend down and hug and cradle his player on the floor. After Butler went out, any chance of the Mountaineers coming back was done.

Final game pick: Duke 74, Butler 60. I'll be rooting for the Bulldogs, but Cinderella becomes a pumpkin.