Share All sharing options for: Eagles trade Donovan McNabb to the Redskins 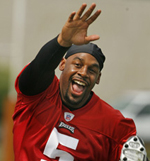 Wow, this is a real WTF? moment -- the Philadelphia Eagles on Sunday traded 10-year quarterback Donovan McNabb to the Washington Redskins. All the Eagles got in return was Washington's second-round pick this year (No. 37 overall) and either a third- or fourth-rounder next year.

That seems like a small amount to get for a quarterback who has been among the elites at his position for a decade, but also reflects that there was not huge demand for McNabb. It's also baffling why the Eagles would trade McNabb within the division. Bank on the first Eagles-Redskins game to be on Sunday night or Monday night.

On the flip side, McNabb took the Eagles to only one Super Bowl, despite playing in the weaker NFC. There were four conference championship game losses since 2001, and McNabb has been injured often in the past few seasons. McNabb is 33, so he could have five or so productive years ahead of him should he stay healthy. For the Eagles, the Kevin Kolb Era will be beginning, and if he flops, the Andy Reid Era will be ending.