International Day Against Homophobia in sports

Share All sharing options for: International Day Against Homophobia in sports 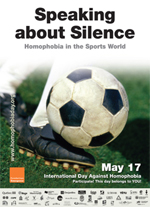 Apparently, yesterday was the International Day Against Homophobia. And apparently the theme yesterday was Homophobia in Sports. I guess the U.S. isn't part of "international," because I barely heard a peep about it, and a quick Google search shows protests and statements from Europe, Asia and Central America...but nada in the U.S. The group tried to get a bunch of sports organizations to sign on to their mandate against homophobia, and got crickets (not the sport) in response:

To make the sports world aware of the need to defeat homophobia, Fondation Émergence invited sports associations, federations, and other organizations to back a declaration signed by the Minister of Education, Sports, and Recreation, Ms Michelle Courchesne, and by the Minister of Justice and Attorney General of Québec, Ms Kathleen Weil. Below is the text of the declaration:

No form of discrimination is welcome in the sports world. Being an athlete is not only about reaching higher and higher physically. It’s also about supporting the values of justice, equality, team unity, respect, and dignity. Plus, it’s fighting any form of discrimination, including discrimination based on sexual orientation. That’s why I lend my support to the International Day Against Homophobia.

Save for two cases, there were no replies to this invitation sent out in September 2009, followed by a reminder in 2010. Fondation Émergence President Laurent McCutcheon states that, “Such a declaration should normally be backed by all those who support society’s values. A behaviour like this is hard to explain in our society. Obviously, the point is that it’s the only banned reason to discriminate provided for by charters of rights and for which society condones such indifference. Even in this case, the system turns out to be stronger than individuals are since what we’re dealing with is systemic discrimination. We need to toughen our will”.

I'm sorry, but to claim that their actions shows discrimination is really disingenuous. Maybe the lack of response is because you can't just show up in sports (or any other business world) for one day, demand equality, and stomp your feet because you didn't get it. Looking at their list of "Partners," I don't see the Gay Games, GLISA, NCLR, Outsports or any other sports entity other than a couple small Canada-based groups listed. No statements or presence (that I could find) from John Amaechi or Dave Kopay or Mark Tewksbury or Gareth Thomas or....harrumph.