Share All sharing options for: New Zealand Olympian comes out 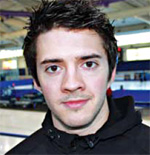 New Zealand short track speed skater Blake Skjellerup, who competed in the Vancouver Olympics, has come out as gay in an interview with writer Lee Suckling in the Australian magazine DNA (disclosure: I am quoted in the article). Skjellerup says that he walked around Vancouver during the Games hand in hand with his boyfriend and also visited PRIDE House, the gay meeting place at Whistler.

I was a bit shocked that I was the first competing gay athlete from these Olympics to visit, especially since I wasn’t able to make it there (owing to scheduling conflicts) until after I had finished competing. But it was great to see such a thing. If I had felt like I needed a space to be myself away from the Olympic village, it would have been there. I hope the idea can grow from Olympics to Olympics.

Skjellerup, 24, was New Zealand's only short track speed skater, a super fast-paced sport that can sometimes resemble roller derby on ice. He did not medal, with his best finish being qualifying for the quarterfinals in the 1,000 meters. He has spent the last 18 months at a training program in Calgary for skaters with immense potential but limited facilities at their home countries.

His boyfriend is also a competitive athlete, though his name and sport are not given in the article (Skjellerup says one reason he likes living in Canada is that the two can legally marry). Skjellerup said he would have told any interviewer during the Games he was gay if asked, but he felt coming out publicly before might have affected his focus and potential sponsors.

Blake’s teammates knew he was gay and, although some didn’t want to hear about it, in no way was he discriminated against. “The first real issue was that I was there to compete – to focus on my skating – and to not have the focus on my sexuality,” he says.

“We are not yet at the point in society where being gay sportsperson is not a big deal. If I was asked during any of my twenty-something interviews at the Olympics whether I had a boyfriend or a girlfriend – in the same sentence – I would have replied honestly, but I may have replied hesitantly.”

As for sponsors, he says that his feeling is that he would not want to be associated in the first place with any company that "choose not to sponsor me because of my sexuality."

Skjellerup said he suffered homophobic taunts from some fellow athletes early in his career, but that he gets along with them well now. As for homophobia in sports, he acknowledges it exists, which makes role models all that more important.

"Gays are too often given a stereotype. Back when I was 18, and becoming serious about my sport and my Olympic goals, if I could have seen an athlete like myself out there – with whom I could relate to – my journey would have been a lot easier.

"[American figure skater] Johnny Weir meets a specific stereotype, I meet a specific stereotype and [Welsh rugby player] Gareth Thomas meets another. Being gay is just like any other personality trait: it’s multifaceted. I can’t personally relate to Weir or Thomas, and nor will many other young gay athletes out there. But maybe some of them will see something in me to relate to. The more types we provide, the more we’ll appeal to people [who are struggling with their sexuality."

Note: The entire article is available online, but only if you are a print subscriber to DNA, or purchase a print copy online. I was sent a copy of the article.