Share All sharing options for: World Cup: I already hate the vuvuzela 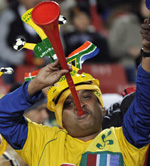 I taped and fast-forwarded through the 1-1 South Africa-Mexico match that opened the World Cup in South Africa. And I am already sick of the vuvuzela, the plastic horns that fans blow endlessly. The collective noise sounds like a gigantic swarm of bees and it drowns out everything else going on. ESPN will need to do something to make its announcers be heard more clearly.

It's a nice concept -- passionate fans and all that -- but becomes annoying idiocy when the horns are blown from well before the match starts until after it ends. It's like the entire crowd at a U.S. football game doing the wave from kickoff to the end while blowing whistles. Of course, I expect soccer purists will call me an ignorant American who doesn't appreciate the passion and atmosphere of the "Beautiful Game."

Turns out I'm not the only only annoyed. A Wall Street Journal reporter in Johannesburg calls them "the bloody vuvuzelas." And some locals are less than thrilled:

“I thought I would be the one dancing and singing, but everyone is here playing the vuvuzela,” said a coffee shop cashier in the upmarket Nelson Mandela Square shopping complex. “It’s driving me a bit mad,” she added with a smile. Several shops inside the mall have closed their doors because of the noise.

On the plus side, the South African team has a totally cool dance when they score a goal (fast-forward a minute into the video):