Share All sharing options for: Mark Sanchez a fan of Broadway musicals 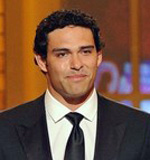 New York Jets quarterback Mark Sanchez is such a fan of Broadway musicals that he introduced a song from "Memphis" at the Tony Awards on Sunday.

"I've become a huge fan of musicals since I've come to New York," Sanchez said from the stage at Radio City Music Hall, "and I've taken some heat from guys on the team, believe me."

Sanchez sings along with show tunes in his car, said his brother and agent, Nick Sanchez. He's even trying to get Jets teammates interested in Broadway.

Sanchez is planning a “date night” with his football buddies and their wives, trying to convince his teammates to join him at a Broadway show. “I think he gets ribbed a little bit,” says Nick Sanchez. “I don’t think it’s commonplace for NFL football players to be Broadway aficionados.”

Good for Sanchez. Most NFL players would not admit to liking something so, well, gay, as Broadway musicals. I have liked how Sanchez has embraced being a star in New York and his appearance at the Tonys shows he's comfortable liking what he likes.