I have been an athlete ever since I was a child. I grew up with five brothers whom I had to always chase after. For a long time, I was the only girl in the bunch. I was taught at an early age how to be a fierce competitor by two of my brothers.

Being from the islands, my background is steeped in track and field. Sprints were my delight, even though I did compete in almost every sport at the meets. I reveled in the limelight of my local and regional competitions in "come-from-behind" wins. As I got older I taught myself to ride. My Sunday school teacher had borrowed my cousin's bike and she asked me to return it to him. I wanted to ride it back instead of walking. I crashed, of course, but no damage done and I was hooked. Living in the USA and participating in the Gay Games has helped me to realize a dream of mine. I was not ever going to be in the traditional Olympics. So being a part of the Gay Games would be my stage. To actually win a medal was a glorious moment. This will be my fifth Gay Games participating in cycling and for that I have won three gold, four silver and two bronze medals. 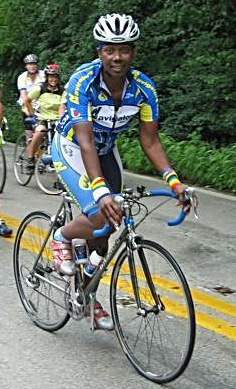 I think I bring certain uniqueness to the Games, as being likely the only black female cyclist (at the previous four Games, I have yet to see anther black female participating in cycling.) There have been black men, few as they are, but at the least their presence was noted.

I would like to see a concerted effort made to actively recruit more black females to the sport and these Gay Games.

I want to thank the Gay Games for allowing us athletes to have a stage to showcase our talents. Because even though it's not the mainstream traditional Olympics, it is for us, our glorified moment and it carries just as much prestige and pride.