Share All sharing options for: Taylor Lautner wants to play wrestler in remake 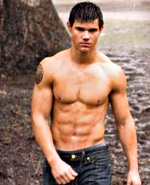 Taylor Lautner, he of "Twilight" shirtless fame, is negotiating to play a wrestler in a remake of the film "Vision Quest," that first starred Matthew Modine and featured Madonna singing "Crazy for You." This will mean a lot of screen time (if the producers have a clue) of Lautner working out and getting all sweaty, sans shirt, of course. Reports the New York Daily News:

A source told E! that 17-year-old Lautner has seen a copy of the script, which is reportedly close to the original's, and is really excited about it.

"It's very much in line with his athleticism," the source said. "His character is someone who's striving for greatness."

MTV News reported that Nicholas Stoller, the straight writer-director of "Get Him to the Greek," sounds like a teeny-bopper when discussing how hot Lautner is.

Stoller also admitted that while he hasn't seen Lautner without his shirt on, he certainly wouldn't mind getting a firsthand look at the actor's shirtless physique. "I'm not even going to do the whole 'I'm not gay' type of thing," Stoller laughed. "Anyone, it doesn't matter who you are, would want to see that!"

I have not seen "Twilight" and have only seen Lautner in still photos, but have gay friends who think he is the hottest thing on two feet. "Vision Quest" will have a built-in audience, given the storyline.

Hat tip to a reader and to Examiner.com.