Share All sharing options for: Blog: My Boyfriend Likes Baseball

I came across a cool blog a while back written by two guys in Atlanta called My Boyfriend Likes Baseball. Kevin Hart is the guy who likes baseball (especially the Braves), while his partner Joey Orr has become a fan thanks to Kevin. I asked them to write an article about the blog, their relationship and how baseball fits into it.

By Joey Orr and Kevin Hart

Joey: My name is Joey, and my boyfriend likes baseball.

Here’s my thing about baseball: I like beer. I like to dance when people score. I also think catchers are hot (Mike Piazza or Joe Mauer decked out in sports gear? Yes, please.)

Seems like there should be more to it for me, doesn’t there? Nope. That’s it. No stats or anything any more complicated than enjoying a day with friends at the ballpark. I’m just getting to the place where I can (mostly) remember which team is from which city. Sometimes I can even tell you if a team is in the National or American League. But that’s all thanks to my boyfriend. He’s the other reason I like baseball. In exchange for putting up with all of my manic chatter about graduate school, I listen to him talk about baseball. But he doesn’t just know his favorite team(s), he also talks about trading and stats and all of the behind the scenes stuff about teams from both leagues and all divisions (leagues AND divisions? Sheesh!). So, we thought it might be fun—and more educational for me—to talk about baseball in a blog format. 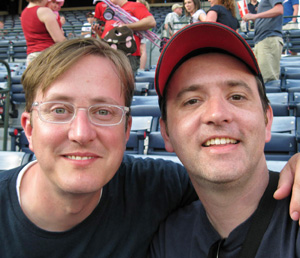 Kevin: My name is Kevin and I don’t like baseball … I love it!

I have always been fascinated by the deliberate pace of a baseball game. Some people think the game is boring and too slow but there are so many moving pieces (some seen and some not seen) to a baseball game that when you start paying attention to more than just how many outs there are, you can’t help but enjoy the game on a different level. At least that was what I was preaching to my boyfriend Joey every spring before the Major League Baseball season began. I agree with him that catchers can be hot, but there are also eight other guys on the field that are very athletic and, depending on your taste, very good looking, as well. This just happens to be a perk to watching a game that involves an abundance of statistics, storylines, and strategies.

I had blogged a little about baseball before, but when Joey proposed the idea of writing a blog in the context of educating him and others with little knowledge of the game, I was instantly intrigued.

Joey: I recently received a master of arts in Visual and Critical Studies from the School of the Art Institute of Chicago. I am currently working on a PhD from Emory University’s Institute of Liberal Arts, which is one of the oldest graduate interdisciplinary programs in the country. I am deeply in touch with the fact that this all sounds like gibberish to many people, and so I carefully edit my answers to questions like “so what do you do?” Since it’s all exciting and important to me, however, it’s something Kevin has to hear about. As my graduate studies continue, my focus gets narrower and, some may say, more esoteric, and therefore my work sometimes requires a little explaining. Kevin’s interest in my work is genuine and since I value this, I don’t take him with me every step of the way, but just make sure he hears the important stuff and the things I know he’d particularly appreciate. Since we began dating in 1997, he has done the same for me about baseball. And let’s admit it, if you’ve never followed baseball the stats sound every bit as strange as my academic institutions and studies. It’s just a matter of being trained to notice certain things and being inducted into new and particular languages.

Kevin: Joey and I generally like the same kind of movies and our taste in music is very similar. We both like good food and wine and enjoy cooking for each other. We both have an appreciation for working artists and the many forms that art may take. Joey’s appreciation in these forms of art is much deeper than mine, but I am genuinely interested, most of the time, because it is something he is passionate about. Many of our friends are artists and while most of his time is focused on his studies, Joey is an artist as well. I don’t always “get” what Joey is studying, researching, or writing about and I don’t always want to venture out to an art opening or event but therein lies the balance. We both know where to draw the line. I can be talking baseball or work and sometimes see the same dull glazed over look in his eyes that he probably sees in mine when he is going on too long about something Emory related. We try not to subject one another to more than either of us is willing to take on but most of the time our interest is mutual.

I played baseball, soccer, and tennis in my youth, and Joey mostly played basketball but our biggest common thread when it comes to sports is that we are both Georgia natives (he was actually raised in Atlanta), so we both grew up listening to or watching the Atlanta Braves.

Joey: I remember the sound of sports in the house growing up…on the radio or television. I find that sound really comforting. I remember my dad taking me to the Braves games sometimes, most memorably in 1982 when they won the first 13 games of their season (a major league record at the time)! I don’t remember how many of those games we went to, but we still have signs that read “I was there 12,” “I was there 13,” and even one of the signs printed in anticipation when the Cincinnati Reds brought it all to an end “I was there 14.” But it wasn’t real love until Kevin.

When I wrote my first entry for the blog…much like my first entry here…Kevin asked, “Wait a minute. You just told why you like baseball. Who is the boyfriend that likes baseball, you or me?” When you’ve been together this long, sometimes these things begin to bleed together. We talk a lot about how we have patience with each other’s interests and how we don’t over burden each other with things we know are only of marginal interest to the other.

But the truth is, it’s fun to watch people’s reactions when I get my baseball lingo right (and maybe even funnier when I sincerely try, but still get it wrong). And if you read the blog, you’ll get to see Kevin talk about baseball, and then also mention artists like Brian Jungen whose work we saw together for the first time at the New Museum in Chelsea. That which does not kill us may make us stronger, but that which does not bore us to death, simply makes us more interesting.