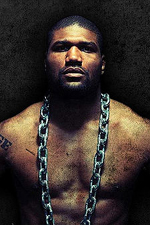 Former UFC champ Quinton "Rampage" Jackson, aka the new Mr. T, made a comment last week that acting is "gay." People got outraged and demanded an apology. Jackson has responded, but sans apology. Instead, he offers some insight into who he is; And despite the "insensitive" remark, I think I sort of buy his response.

I am a black man from Memphis Tennessee who grew up in the south where I faced discrimination my whole life. I know very well how it feels for someone to judge you for something you have no control over so having gone through that I know how it feels. I took a vow that I didn't even have to say that I would never discriminate against anybody for anything other that how they treat me or others around them. So not only DO I NOT HATE gay people, I actually accept them for who and what they are.

He even said he was helping a friend promote a gay bar.

Some will continue to attack him for his "that's so gay" comment. And I understand that. But it sounds to me like this guy isn't a raging homophobe, and we have bigger fish to fry.