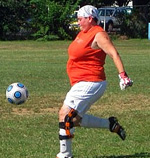 "Carry out your dream, no matter how unlikely it may seem." - Terry A. O'Neal

Hi, my name is Sami Holtz and I am a 29-year-old soccer player from the DC area of Maryland. Oh, and I am playing in the 2010 Gay Games in Cologne! I have always worked to accomplish everything I put my mind to, to follow my dreams. An athlete has always been part of who I am and whether I was on the soccer field, the rugby pitch, or in the swimming pool, I have worked to compete at a high level.

When the opportunity to go to the Gay Games in Cologne presented itself, I was extremely excited. I was on the host committee for the 2009 IGLFA (International Gay & Lesbian Football Association) World Championships held in DC last June and thoroughly enjoyed working with soccer players from around the world. I am truly looking forward to playing in another International tournament. I will be competing in the 7v7 women’s soccer tournament with the team from Chicago.

Back in the States, I lead a fairly ordinary life. I am an Elementary Physical Education teacher in Prince George’s County, Md. I have been teaching for four years and love it. The feeling of knowing you have an impact on a kid’s life is extremely rewarding. In fact, I see some of my former students when I am working my summer job at the pool and they are always quick to smile and say hi. In addition to teaching, I have also done a good amount of coaching. I coached my fifth and sixth grade boys on the soccer field and have coached swimming for the past six years.

I was thinking about my history playing sports and realized that I have actually been playing soccer on and off for about 21 years. In addition to soccer, I have played various other sports. Most notable were Division I rugby for Boston University and women’s pro tackle football for the Rhode Island team. I really like being part of a team, so after injuring my knee playing football I went back to soccer.

I am currently a member of the Federal Triangles Soccer Club in Washington, DC and play on several of their women’s teams. Our Washington Area Women’s Soccer League team called The Feds has won Division II twice since I started playing with them and managed to finish in fourth place in Division I this past season. My Sunday team, the Arlington Feds finished in third place in our division this past season in the Arlington Women’s Soccer League. In addition to playing on these teams, I currently serve as the board member-at-large.

Anyway, I am really looking forward to going to the Gay Games as I have never been to Europe. It is my pleasure to represent female LGBT soccer players both in DC and abroad. I plan to play hard and bring home the gold!