Olympic gold medal figure skater Evan Lysacek questioned the gender of rival Johnny Weir on his Twitter feed, then tried to cover it up by claiming his account was hacked.

Here is what a fan tweeted Lysacek and here is his reply:

Lysacek: "verdict is still out."

The blog Gendertestthis has a thorough take down of the issue, so check it out for the blow-by-blow. Basically, people started to criticize Lysacek for his comments, which then prompted he and his rep to claim there was a fake Evan Lysacek Twitter account (without claiming this account posted the offensive comment). Later, after that story fell apart, they changed it to claiming Lysacek's Twitter feed was hacked, without offering any proof, and which Gendertestthis effectively debunks (using several incriminating screencaps).

It got so bizarre that the fake Lysacek distanced himself from what the real Lysacek tweeted: "I am extremely disappointed in my actual person. No one should ever make a comment like that. I, fake Evan, promise to be better than that."

Lysacek has settled on the "I was hacked" defense, offering up this:

Apologies to @JohnnyGWeir. Am taking measures to make sure something like this never happens again. The comment was insensitive, hurtful and offensive. Cannot apologize enough to Johnny and his fans.

Nothing in this apology acknowledges that Lysacek himself was the one that made the comment – in fact, the vague “Am taking measures to make sure this never happens again” seems to suggest that rather than taking responsibility for what he said, he’s trying to deflect the blame onto a hack AGAIN. Not to mention that if he couldn’t “apologize enough,” he probably would have started doing so right away, instead of trying to blame a fake Twitter and then calling hack.

There has still yet to be any independent verification or confirmation from Twitter that Lysacek was hacked. But instead of owning up to his commen, he continues to try to weasel out of responsibility, even while nominally apologizing for it. I see their PR strategy still relies on assuming Lysacek’s fans do not know how the Internet works.

This kind of behavior is unacceptable from anyone, but for a public figure to do it in a public forum is especially awful. It breaks my heart to think about the young queer, genderqueer, gender variant, transgender, and questioning figure skaters and fans of figure skating who had to see Lysacek mock someone’s gender ID and know that this how an Olympic gold medalist of their sport behaves.

Lysacek's hacked defense looks to be lame and pathetic. Instead of manning up and apologizing immediately, he and his rep got together and tried to concoct a way to deflect the attention from what he said. He might not know Weir's gender, but I can tell who's the real man. 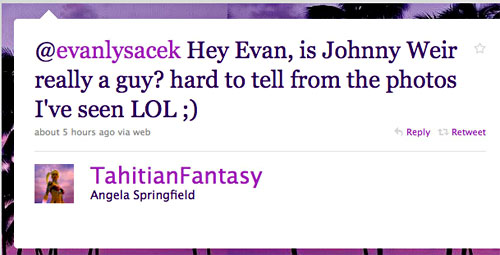