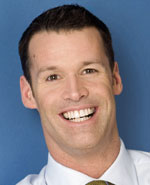 I missed this while away in Cologne at the Gay Games, but Canada announced that Olympic swimmer and openly gay athlete Mark Tewksbury has been named the country's chef de mission for the London 2012 Summer Olympics. This means he will be the head representative and official spokesman for the Canadian Summer Olympics team.

Tewksbury, 42, won gold at the 1992 Barcelona Games and came out as gay in 1998. He is excited about his role in the 2012 Games. Canadian athletes also expressed their approval of the choice.

“The experience of being an Olympian is timeless,” Tewksbury said. “I understand pressure. I want to make sure (the Olympic team) can get through it the best they can.”

They didn’t choose a gay chef de mission, they chose Mark Tewksbury, who happens to be gay — that means a lot. If I can play a role before we touch down in London, it’s going to be my best Olympic experience. I have no doubt it could surpass winning the gold.