The highest-paid athlete of all time

Share All sharing options for: The highest-paid athlete of all time 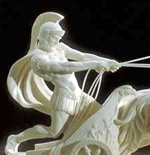 I am big history buff, so I found this item pretty neat: A classical studies professor at the University of Pennsylvania has calculated that the highest-paid athlete of all time was a famous chariot racer in ancient Rome. His take (based on some intricate calculations) -- $15 billion, which puts Tiger Woods' $1 billion in earnings to shame. Writes Peter Struck in Lapham's Quarterly:

The best paid athlete of all time—was a Lusitanian Spaniard named Gaius Appuleius Diocles. ... Twenty-four years of winnings brought Diocles—likely an illiterate man whose signature move was the strong final dash—the staggering sum of 35,863,120 sesterces in prize money. The figure is recorded in a monumental inscription erected in Rome by his fellow charioteers and admirers in 146. ...

His total take home [would] ... pay all the ordinary soldiers of the Roman Army at the height of its imperial reach for a fifth of a year. By today’s standards that last figure, assuming the apt comparison is what it takes to pay the wages of the American armed forces for the same period, would cash out to about $15 billion. Even without his dalliances, it is doubtful Tiger could have matched it.

Struck does not mention that when Diocles switched chariot teams, he announced it on a one-hour special in the Forum, hosted by RSPN.