Is cheerleading a sport?

Share All sharing options for: Is cheerleading a sport? 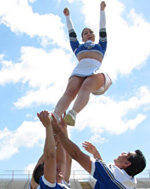 When Quinnipiac University cut women's volleyball and kept cheerleading, the volleyball players sued saying it violated Title IX. A judge has agreed, forcing the university to add more women's sports scholarships. The decision raises the question about whether cheerleading is a sport.

My greatest cheerleading memory was at a Stanford-Cal football game. One of the Cal fans had managed to get on the field and steal the large Stanford flag that one of the cheerleaders paraded around the field after a score. The memorable moment came when the male cheerleader ran into the Cal stands, tossed aside a couple Cal fans, caught the guy from behind, punched him in the face, threw him on the ground like a rag doll, stole the flag and did a couple laps raising it over his head.

That cheerleader was in better shape than half the football team. With all the running, jumping, throwing and twisting that both the male and female cheerleaders do while performing, it's tough for me to agree that cheerleading isn't a sport when golf and baseball are. And from a Title IX perspective, do the courts really need to make an oppressive law even more limiting?