Brett Favre is back. Again. Snooze.

Share All sharing options for: Brett Favre is back. Again. Snooze. 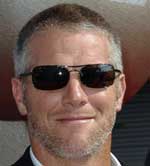 Zzzzzzz. That's pretty much been the response to Brett Favre's announcement today that he is coming back for a 20th season in the NFL. Sports Illustrated has obviously decided not to play into his bullshit, going with baseball and a feature on athletes and domestic violence as their two main stories instead of the once-again Viking. Since everyone knew he'd make this decision again, it's not really news; But it does get me thinking about what it means for the Vikings.

While experts are saying it makes them Super Bowl contenders, for my money this smells like disaster. Ankle surgery, staying away from training camp, saying he doesn't care, coming back for another run at a Super Bowl: It just reeks of ending badly. Last year their schedule fit together perfectly with a soft start and the right match-ups at home; Instead of easing in with a visit to the Browns in Week 1, they visit the Saints in 22 days. On top of their division road games this year they visit the Saints, Jets, Patriots, Redskins and Eagles.

I do think the team upgraded in the offseason (particularly getting Toby Gerhart in the draft), but sometimes the vibe isn't right for a team, and for some reason I sense heartache to finally end Favre's career.