Couple have memorable day in diving

Share All sharing options for: Couple have memorable day in diving

It was quite a day Monday for divers Andrew Kasney and his partner Kai Robinson. In the morning, Kasney won gold in the men's 3-meter springboard while Robinson took the bronze. They then won the gold in pairs diving, which was more of an exhibition since there were no other competitors. But given their morning medals and the response from the judges and crowd, it would have been hard to see anyone beating them.

Diving is what brought Kasney, 29, and Robinson, 23, together. A fellow diver sensed a love match and introduced them and they have been together for two years. They live in New Jersey but swim for the Philadelphia Fins.

This is Robinson's first Gay Games and first gay diving meet ever. "It's so much fun and it's a life-changing event," he said. Kasney also competed at the Chicago Gay Games in 2006, where he won a gold medal. Both dove in college -- Kasney for the College of New Jersey (where he won second place in the NCAA Division III finals) and Robinson at Amherst College.

They were among the nicest and most cooperative people I have met in Cologne -- they even climbed back up onto the springboard with me following for a photo, then risked their necks getting on the end of the board together for the right shot: 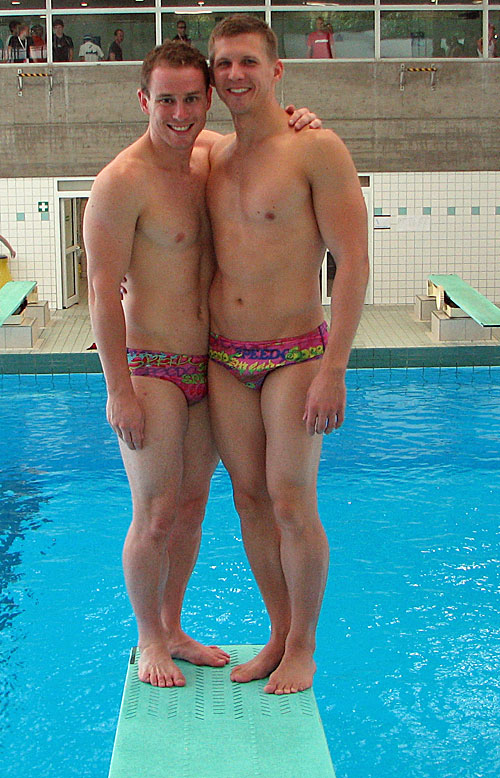