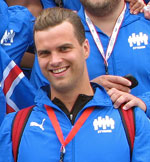 If my experiences with members of Styrmir Reykjavik the past two years is any indication, the 2012 International Gay and Lesbian Aquatics championships in Iceland will be a blast, and no one will have to bring toilet paper. Reykjavik will host the event, May 30-June 2, 2012, it was announced at the Gay Games.

I first met the Icelandic athletes of Styrmir a year ago at the Outgames in Copenhagen and was charmed by their lack of pretense, friendliness and fun. I wrote about their financial struggles (the country went bankrupt during the worldwide banking crisis) and how their sports teams sell toilet paper as a fund-raising tool (along with vegetables and condoms). So running into them again (swimming and soccer are their big sports in Cologne) has been a highlight.

"Iceland is a beautiful country with fantastic pools and very generous people," Styrmir spokesman Bjarni Snaebjornsson said in pitching Iceland as a great venue for IGLA. Unlike cities where a swim meet is just one of myriad sports events being held, IGLA 2012 will be big news in Iceland. It is expected to be the largest sporting event in the country's history (1,000 athletes is the goal), Snaebjornsson said, and the awarding of the bid is expected to be front-page news.

One cool idea they have planned is called the Rainbow Ride -- basically, the idea to get all citizens of Reykjavik to agree to offer free transportation to any IGLA athlete, simply by showing their ID badge. Be careful, though -- the driver is liable to try to sell you toilet paper or maybe Trojans.

Iceland has gay marriage -- Snaebjornsson and his husband married two years ago -- and an openly lesbian prime minister, Johanna Sigurdardottir. It is also easily accessible from Europe and the northeast U.S. and even has daily non-stops between Reykjavik and Seattle.

IGLA has a fire and ice theme going the next two years -- Hawaii in 2011 (hosted by West Hollywood Aquatics) and Iceland in 2012. I can see why the meet is always a big draw on the gay sports calendar. 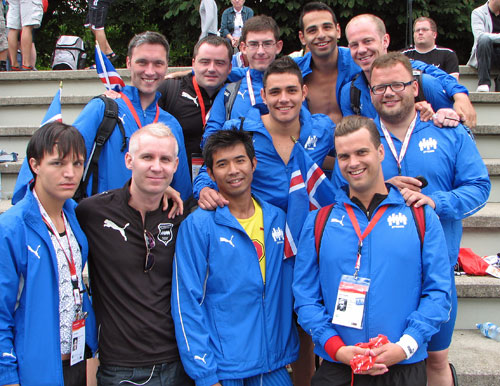