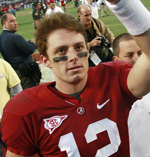 No surprise, but defending BCS champ Alabama is the overwhelming favorite to repeat as No. 1 in college football, if the preseason AP poll is accurate. The Tide garnered 54 of the 59 first-place votes. Rounding out the Top 5 are Ohio State, Boise State, Florida and Texas.

It's Boise State at No. 3 (the Broncos are No. 5 in the USA Today poll) that is the most intriguing to me. It's by far its highest preseason ranking and gives the school from the non-power WAC a legitimate shot of the BCS title game, which pits the top two teams in the BCS rankings.

Because -- unlike college basketball -- big-time college football does not have a playoff, rankings play an oversized role in determining major bowl bids. This is why even preseason polls matter, even though the first BCS rankings don't come out until after a few games have been played. Teams ranked preseason in the late teens (like Georgia Tech, Arkansas, North Carolina and Penn State) need to leap-frog a lot of teams to be considered viable.

I would love to hear from college football fans which teams they see as being sleeper teams that will wind up in the national title conversation. The season kicks off in two weeks and hope spring eternal on campuses everywhere.

One of the major knocks on the BCS -- besides there not being a real playoff system -- is that schools such as Boise had zero shot of winning the title since they were perceived as being from lesser conferences. But the Broncos have won two BCS bowl games the past few seasons and should they wind up as one of two unbeatens, it's hard to see them not playing for the BCS title.