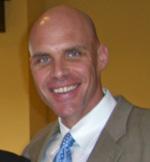 Billy Van Raaphorst, the openly gay umpire who was the subject of a homophobic tirade by a manager who has since lost his job, spoke in Edmonton last weekend. What is cool is that Van Raaphorst was invited to Edmonton by the company that owns the NHL's Edmonton Oilers and the Edmonton Capitals, the minor league team that had employed Manager Brent Bowers, the instigator of the tirade.

Far from running away from the issue of gays in sports, the Oilers embraced it, even producing an in-house video posted on their site on Van Raaphorst's visit:

I had written last week about the overwhelming positive response Van Raaphorst received after the incident. His visit to Edmonton was an extension of his theme. His visit -- where he spoke on diversity, gave a clinic and umpired two games -- received prominent media coverage in Edmonton (see here, here and here), thrusting the issue of gays in sports to the forefront.

We often slam sports organization when they don't stand up to homophobia by their employees, so the Oilers/Capitals deserve major credit for turning an ugly incident into something positive and a lesson in diversity.