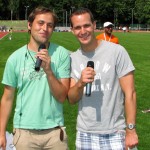 I heard several people talk about the two hot announcers at track and field, so here's the 911. They are Flo Weber and Tim Husel, both 26 and gay. Weber was the announcer at last year's world track championships in Berlin, heard about the Gay Games and wanted to be a part. Weber is the English speaker of the duo, and his brother is acting as track DJ.

Medal inflation: I've long decried what I call medal inflation at the Gay Games, the practice of awarding medals to anyone who finishes first, second or third in an event, even if they are the only one in their age group. The counter is that the event is supposed to be about participation and inclusion. If so, why have medals in the first place? 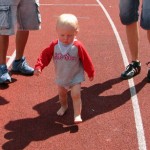 But this was taken to the extreme at track and field, as witness the winner and sole participant in the Under 2 division in the 100 meters. To be fair, he did have a personal best of 3 hours, 12 minutes and passed his drug test.

Table tennis anyone? Table tennis has zero profile in the U.S. as a competitive sport, but it's big elsewhere in the world, especially China. I met Amir, a smoking hot Austrian athlete who gets paid to play in the second division of the Austrian league. Amir said that the Austrian champion is barely noticed in his home country but gets mobbed whenever he visits China.

Amir convinced a good friend to come to Cologne and encouraged him to play. The two met for the gold medal in their division and Amir took the silver. "I never play well against him," he said. 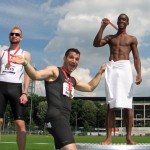 Towel man: Teddy Francisot of France blazed to victory in the men's 100 meters, 18-29 category. Afterward, he had stripped down naked for a much needed massage. Only trouble was that they were about to call his name to get on the medal platform.

He wrapped a white towel around his waist, and seemed hesitant about what to do. Finally, he shrugged and walked out in the towel to the cheers and hoots of the crowd to receive his gold. It was the biggest ovation of the day and the towel routine should now become standard operating procedure.