Who will take the U.S. Open crowns?

Share All sharing options for: Who will take the U.S. Open crowns? 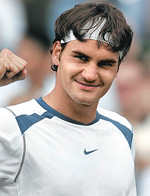 For many Americans, the start of college football and the NFL signals the the beginning of autumn. But for many others, it's the U.S. Open that ushers in the changing of the seasons. On the men's side, Rafael Nadal will try for the second year to complete a career Grand Slam; But Roger Federer won last week's big tune-up for the Open. On the women's side, with three-time champion and world No. 1 Serena Williams out, Serena's sister Venus (a two-time champ in Flushing Meadows) will try to outlast a bunch of talented Europeans.

My biggest complaint about the U.S. Open: The men's final is always on the opening NFL Sunday. I'll bop back and forth between the tennis and football, but it does interrupt my enjoyment of both.