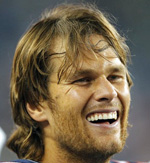 It's all part of an NFL rivalry that has been dormant but never gone away between the Jets and Patriots. Ryan and his loud-mouth boasting, plus the Jets going further than the Pats in the playoffs last year have rekindled the hate-fest, which makes it highly entertaining for fans with the season kicking off in 10 days.

Brady started it all last week when he was asked whether he was watching "Hard Knocks," which has garnered tons of attention for the Jets and high ratings for HBO.

"You know, I haven't turned it on," Brady said on WEEI this morning, via the Boston Herald. "I hate the Jets. I refuse to support that show. . . . I'm sure it's great TV and I'm glad people are liking it. But that's something I have no interest in watching. I'd love to say a lot of mean things, too, but I'd rather not do that, either."

Ryan, never one to back down, fired back.

Of Brady saying he refuses to watch the show, Ryan said, "He knows we hate the Patriots."

"My brother [Rob, a former Pats' assistant] has a couple Super Bowl rings and he loves Tom Brady," Ryan said. "I don't like Tom Brady."

But Sanchez is more of a lover than a fighter:

Asked if the feeling of hatred was mutual, Sanchez said, "No, I love the Patriots. I love Tom."

Then Sanchez looked into a TV camera and said, "I love you, Tom."