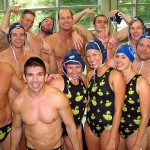 The Queer Utah Aquatics Club of Salt Lake City, or QUAC, stormed to the open division gold in water polo by dominating the Melbourne Storm, 11-5, in the gold medal game Friday. It couldn't have happened to a nicer team. (gallery below).

Melbourne came into the game unbeaten and winners of a 9-7 match against QUAC in pool play. But coach Tom Taylor told me beforehand that the team had learned from the loss and put some wrinkles into the game plan. The result was a quick 4-1 lead that had Melbourne flustered. The Storm did not keep its composure and committed a lot of fouls and even allowed a goal on a penalty shot.

QUAC, along with the Icelandic swimmers and Cologne sprinters, were my favorite teams at these Games. They were all incredibly friendly and cooperative, happily posing for photos (see gallery below) even shortly before the match. And I got to spend some time on the sidelines with Taylor's two teenage adopted sons, who were cool to hang out with. The water polo final is always a marquee event for me and QUAC clearly deserved its title.

In the bronze medal game, WeHo scored with less than 30 seconds left to beat Amsterdam, 4-3.

Winding down: The Games are pretty much done, with just the marathon, basketball and soccer golds to be decided. After a week of competition, people looked drained, but happy. This has been a terrific event and Cologne should be proud. I will do a longer recap when I get back to L.A.

Ancestral ties: Met a gay journalist from Croatia who was thrilled to hear that Gay Games ambassador and former NFL player David Kopay is part Croatian. Go figure. Spending time with Dave this week has been a real highlight, especially when he and Cyd argue politics.

Courteous drivers: I am amazed at how quickly cars here stop for pedestrians – just take a step near a crosswalk and traffic halts. I wonder how a New Yorker driving here would fair, or New York pedestrians for that matter, who think traffic laws are made to be ignored.

Gallery, QUAC at the gold medal game (click for large view, then again for full-sized view):