Travon Free, now a comedian, shared his true self with the world in 2011. 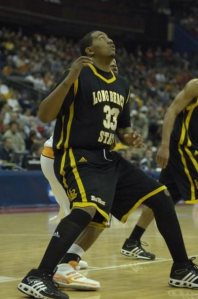 You can count the number of Div. 1 college basketball players who have come out as gay or bisexual on one hand. Now count former Long Beach State 49er center Travon Free as one of the very rare openly bisexual former collegiate ballers. Free appeared in 55 games for the 49ers from 2003 to 2007 with a solid field goal percentage of almost 50%. Still, Free's coming out is inspiring, and he wrote a long insightful piece on his coming out.

Being a young teen I was deathly afraid to mention my feelings to anyone, given the fact I was the basketball player who spent most of his time around other boys all the time. I didn’t want to make anyone uncomfortable nor did I want to face the possible rejection and ridicule that would come along with thinking you might be anything other than straight. I knew I couldn’t be gay because I knew I was attracted to girls sexually but I knew there was more to me than I could understand at the time.

Free is now a comedian in Los Angeles.