Share All sharing options for: Gay teen athlete's coming out letter to parents 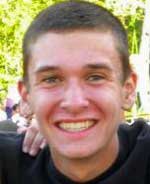 Brad is a 16-year-old high school sophomore in the Pacific northwest. He runs for his school’s cross-country and track teams and is gay. He plans to attend college, major in either pre-med or international relations and be a competitive athlete.

I can vouch for Brad’s identity and that is his picture. I have seen his ID, spoken several times via Skype webcam and exchanged numerous texts and messages on Facebook. But I am not including his last name in this post for a reason -- Brad, along with his friends Robert and Ben, themselves gay high school athletes -- are about to launch a blog to talk about their lives and connect with others like them. I want them to come out publicly on their own terms when the blog starts (it is now live).

Brad shared with me the coming out letter he wrote last month to his parents. I was moved reading it and felt Outsports readers would feel the same. Except for omitting specific names of his friends, the text has not been changed:

I am not one of those stereotypical gays that you see on television that wear sparkles and make-up. I am me, Brad. I will still be exactly the same because I don’t think that being gay should change anything about you besides who you want to spend the rest of your life with.

I will always do sports and I am excited for the track season this year as well as being captain for cross country next year. I will never let being gay stop me from doing what I want to do. I still want to run cross country and track at a Division 1 college even though openly gay people are very rare to find in that competitive of a league.

I don’t know how the rest of the world will take this news, but I am rather sure most of my friends already know thanks to people telling each other. Instead of seeing this spread of gossip as a bad thing, I see it as reassurance in letting me know that my friends are my friends and they will never abandon me for some stupid reason such as this. My sports teams may take a little longer to come along but as some people have said, locker rooms may be homophobic but if you are a key person in winning then they will accept you, and yes I would say I am a key person in winning meets.

You ask why now? Well I am just done hiding who I truly am because of fear. Who will change people’s perceptions of gay people in sports for the younger generations if no one comes out and proves people wrong? I am ready to be me.

I love you guys and I know this would never affect anything between us. If anything I know it will strengthen our bond that we all share together. I don’t want you guys to worry about me in this process because I am a strong person and having amazing people all around me who will be by my side. I wrote this note to you instead of just telling you because I thought it would be awkward to bring up.