Gay teen athlete: "We are all in this together"

Share All sharing options for: Gay teen athlete: "We are all in this together" 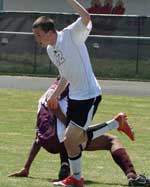 Robert is a 17-year-old living in the South, a big fan of cars, music, video games and the Chicago Bears. He also plays soccer on his high school team and is gay. Along with two friends, Brad and Ben, he will be launching a blog next week specifically to connect other gay and questioning high school athletes.

I know Robert’s identity and that is his picture, but I am letting him tell his own story on their blog, which I think can really make a difference for teenagers. Robert sent me the following piece to ask me if it should go on the blog. I think it is so heartfelt and moving about the struggles of a young person to come to terms and acceptance with his sexuality that he allowed me to share it with Outsports readers ahead of the blog going public:

For many years I had fought myself, enduring inner turmoil which led me to believe that I could turn myself straight. There was nothing more I wanted to feel than to feel accepted, to fit in, to end this awkward feeling inside of me that told me I liked other guys. Moreover, I would pray every day for a higher power to change who I was. I thought this would take all my problems away. Imagine waking up every morning telling yourself, “I like girls, I don’t like guys,” or “Liking guys is wrong, there is no way I like guys, it’s just a phase.” I continued to tell myself that for years to proceed and while it brought instant gratification, it only proved detrimental in the years to come.

I became very angry with the world, which led to taking that anger out on those who meant the most to me. From my friends to my family, one by one I began to shun them; thus proceeding to stop talking to these friends, even family at one point to thinking of hurting myself. I was completely oblivious to what damage I had been causing not only to myself but to those who I love dearly. I realized only six months ago from a very good friend of mine, one whom showed me the error of my ways and who helped me back on my feet, to rehab what damage had been done. To this day I look back on what I went through – from losing close friends to almost throwing my life away at the expense of how I felt - I have become stronger because of this.

So this is what I have to say to the rest of you: who are you and what is your story? We are all in this together, we are just writing [this blog] so that you may find some clarity in how you feel. One thing is clear, as a gay athlete, I know that I felt like I was the only one in the whole world that was unhappy, that felt alone, but I stand before you as a gay athlete, a soccer player, an average guy with a dream to rid the world of ignorance. My question to you is how do you plan to change the world? Take a walk down the path to clarity as we join you, because you are not alone.

In the last week, Robert has come out to his father (he told his mom two weeks earlier) and it went much better than he could have hoped. “Oh, how things are easier now,” he texted me today.