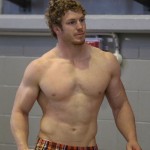 Australian rugby star David Pocock has a real sense of justice, supporting equal right and the fair trade movement. He's also passionate about the rights of gays to marry, so much so that he and his partner, Emma, won't legally marry until gays Down Under can. In a profile in the New Zealand Herald, Pocock said:

"Being brought up in a Christian home and still identifying as Christian, I get pretty annoyed with the Christian lobbies around the world who say gay marriage destroys the family and all that kind of rubbish.

"They claim to follow someone who always stood up for the oppressed and marginalized.

"I guess it is a fear of the unknown - if you talk to someone who doesn't like gay people you can almost guarantee that they don't know too many.

"These are the prejudices that you have to challenge and break down. Emma and I decided not to get legally married until our gay friends could do the same."

Bravo for Pocock, nicknamed "Bam Bam" for his resemblance to the baby in the Flintstones. He is in New Zealand with the Australian Wallabies for the Rugby World Cup.

Pocock was born in Zimbabwe and his family fled to Australia following political turmoil there. The profile is well worth reading about his upbringing. We need more athletes standing up for gay rights like he does.